trax.smtown.com
TraxX, formerly known as The TRAX and TRAX (트랙스) is a South Korean group formed in 2004 by SM Entertainment and formerly produced by X Japan's co-founder Yoshiki. They originally consisted of: Typhoon Jay (leader and vocals), Rose Minwoo (drums), Attack Jungwoo (bass) and Xmas Jungmo (guitar). Member Minwoo official departed from the group in 2006 while Jungwoo left in 2007.

TRAX is an acronym of Typhoon-Rose-Attack-Xmas. The acronym also used for the members stage name. TRAX also refers to recording tracks. The band formerly debuted as The TRAX, they later changed the name to TRAX in 2010.

In March 2018, SM Entertainment announced that the group will be changing their name to TraxX and will transform to an EDM group. A new member, DJ and producer GINJO, will be joining the group. 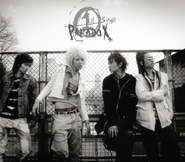 "Paradox" (2004)
Add a photo to this gallery
Retrieved from "https://smtown.fandom.com/wiki/TraxX?oldid=16997"
Community content is available under CC-BY-SA unless otherwise noted.