Lee Tae-min (이태민), better known by the mononym Taemin (태민), is a South Korean singer, dancer and actor. He is a member of the boy group SHINee.

Taemin made his solo debut in August 2014 with his first mini album ACE.

In February 2016, he released his first album Press It, and in July of the same year, he debuted in Japan with his first mini album Sayonara Hitori.

As a featured artist 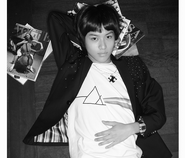 Retrieved from "https://smtown.fandom.com/wiki/Taemin?oldid=16198"
Community content is available under CC-BY-SA unless otherwise noted.