seohyun.smtown.com
Seo Ju-hyun (서주현), better known by her stage name Seohyun (서현), is a South Korean singer-songwriter and actress. She is a member of the girl group Girls' Generation and its sub-unit Girls' Generation-TTS.

Seohyun made her solo debut in January 2017 with her first mini album Don't Say No.

In May 2018, it was reported that Seohyun left Sublime Artist Agency after her short term contract with them expired and plans to establish a one person agency. 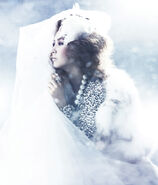 Retrieved from "https://smtown.fandom.com/wiki/Seohyun?oldid=21213"
Community content is available under CC-BY-SA unless otherwise noted.