SHINee
Lee Jin-ki (이진기), better known by his stage name Onew (온유), is a South Korean singer-songwriter and actor. He is a member of the boy group SHINee.

He was born on December 14, 1989 in Gwangmyeong, Gyeonggi-do, South Korea.

As a featured artist Edit 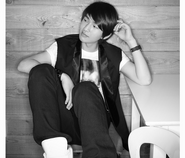 Retrieved from "https://smtown.fandom.com/wiki/Onew?oldid=16255"
Community content is available under CC-BY-SA unless otherwise noted.