He was inactive due to driving under the influence and a hit-and-run incident in May 2016.

He announced his departure from Super Junior on July 2019.[1] 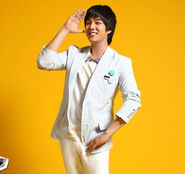 Retrieved from "https://smtown.fandom.com/wiki/Kangin?oldid=19576"
Community content is available under CC-BY-SA unless otherwise noted.